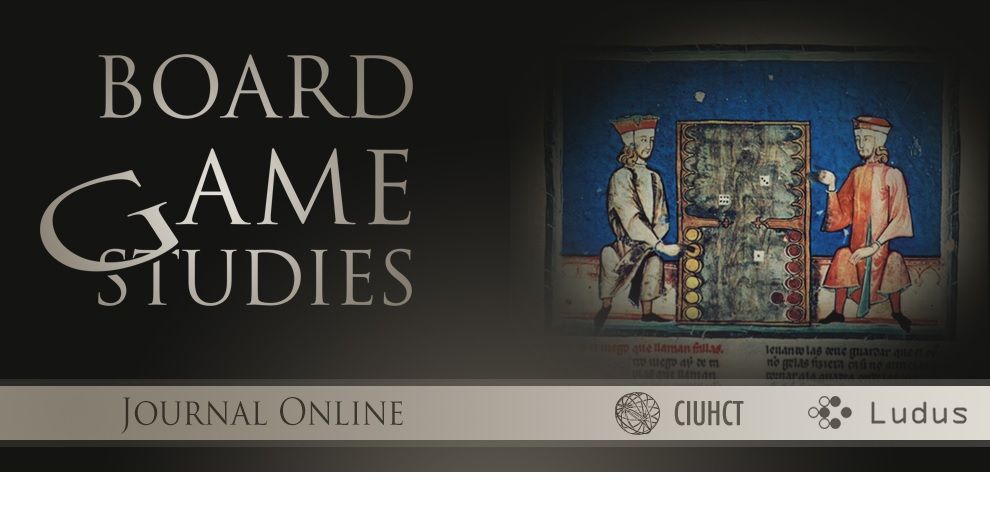 Board Games Studies was first published in 1998, an initiative inspired by the colloquia

on board games held at Leiden University, the Netherlands, in 1995 and 1997. Five

institutions affiliated themselves with the journal: the Institut für Spielforschung und

Spielpädagogik in Salzburg, the International Institute for Asian Studies in Leiden, the

Russian Chess Museum in Moscow, the British Museum in London, and the Department

of Computer Science at the University of Maastricht. The journal, which was published

by CNWS Publications in Leiden on a yearly basis, was partially funded through the

assistance of patrons and boasted a modern layout, trilingual summaries and color plates.

The broad ambition of this journal required a continuous commitment from the editors,

who reviewed contributions in German, French and English, provided translations of

summaries for each article and, in several cases, collaborated extensively with authors to

develop manuscripts that were to the academic standards of the publication.

The journal had a trial run of three years, after which the format, content and

review process was evaluated. The authors of the articles integrated wide-ranging

literature necessary for a comprehensive understanding of particular games.

philology, classical archaeology and history — allowed for a better historical and

systematic understanding of board games to emerge. Starting in 2000, a section with a

complemented the multi-facetted contents. Its first ambition, to serve as a platform for the

publication of board games research, was met quickly, while gradually the journal gained

The colloquia continued from 1995 onwards, moving from a biennial to a yearly

schedule. The host institution was expanded beyond Leiden to universities and museums

throughout Europe as well as Jerusalem, Philadelphia and, in 2013, the Azores. The

colloquia continue to gather an enthusiastic group of scholars, players and collectors.

Despite the institutional affiliations and a group of patrons, the production of the journal

publisher. Reluctantly, the paper version of the journal was discontinued after volume 7

online publication of the first issues, a decision that greatly assisted the dissemination of

knowledge accumulated in those early volumes. The next step, an online journal that

operates again as a platform for recent board games research, was not far away but

required the skills and enthusiasm of previous and new editors to materialize.

In these last fifteen years, the study of board games has gained momentum and

this journal will not only showcase new results but, most of all, will encourage and

publicize the work of the dedicated researchers in this field.

About us | Editorial Board | To the authors | Contact us